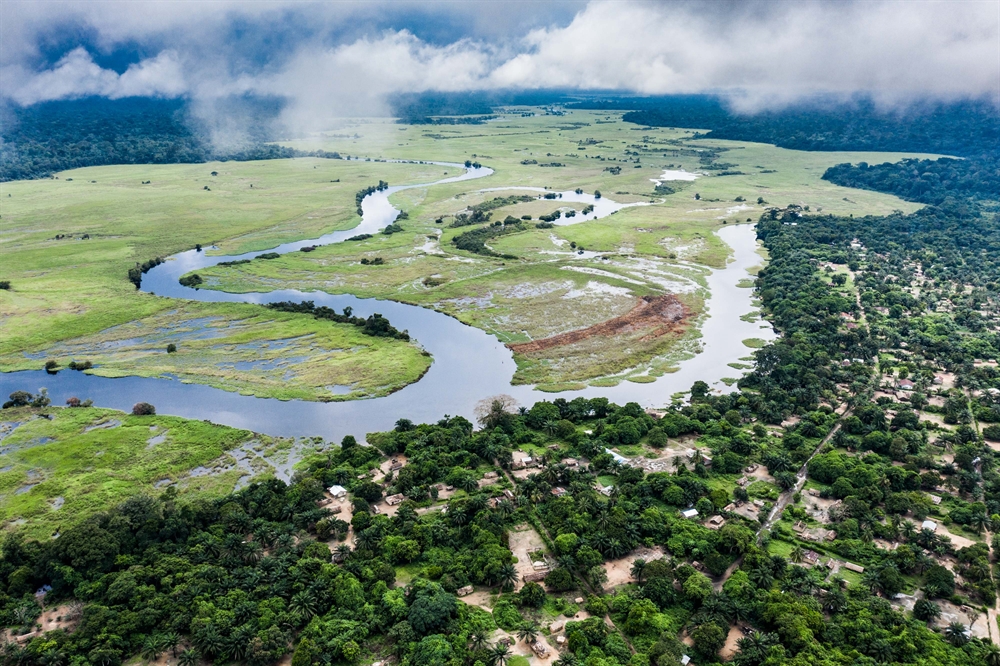 As the world’s climate leaders gather in Glasgow for the Conference of the Parties to the UN Framework Convention on Climate Change (CoP26), a little-known Community Reserve in the Republic of Congo – that stores almost a billion tons of carbon – quietly celebrates its 20th anniversary this month.

The Lac Télé Community Reserve (LTCR), the only Community Reserve in Congo, protects the natural heritage of this exceptional place by the people who live there. The Wildlife Conservation Society (WCS) and Congo’s Ministry of Forest Economy (MEF) ensure the collaborative management of the 4,400 square kilometer (1,700 square mile) reserve located in the Likouala region.

The Lac Télé region is a RAMSAR-listed wetland of international importance made up of swamp forests, flooded savannahs, floating grasslands and forested peatlands. It is located in the world’s largest tropical peatland – nearly 145,000 square kilometers, which as a whole stores nearly 30 billion tons of carbon – estimated to be more than is stored in the entire above ground tree biomass of the Congo Basin, or roughly three times the annual industrial carbon emissions of the entire planet.

Lac Télé harbors rich flora and fauna, supporting the highest known density of gorillas in the world, along with large populations of chimpanzees, forest elephants, hippos, and an incredible diversity of birds, fish, and plants. Twenty 20,000 people share this incredible landscape, spread over 27 communities, earning a living mostly from fishing and agriculture.

The richness of the region’s fauna was confirmed in 1996, following surveys carried out by the IUCN. The following year, a two-year civil war began in Congo.

Sais Roger Mobongo, a key member of the community development team that has worked for Lac Télé since its beginning: “Military weapons entered the region following the war in 1997, which led to an increase in poaching. The creation of the Reserve in 2000 was a necessity.”

In 2001, WCS signed a co-management partnership to support the government’s commitment to protecting these important wetlands and their importance for wildlife, climate and local livelihoods. The successful collaboration between MEF, WCS, and the local communities has helped curb poaching through the deployment of ecoguards throughout the Reserve.

For Gérard Bondeko, community coordinator who has also been involved in Lac Télé for 20 years, even more important than the guards is “the awareness of the people” of the importance of safeguarding their environment.

Says Bondeko: “The evidence of animal is more important today. When we talk to the people, they tell us that they have seen animals where there were none before.”

At the end of 2020, for example, a solitary gorilla surprised the village of Iyahou by spending several weeks peacefully near the inhabitants. Nicknamed “Gentil,” this astonishing primate was then followed until its return to the heart of the forest by teams from the reserve to ensure its safety.

“The reserve has provided support for agricultural development, for the production of maize, manioc, peanuts and cocoa, using innovative techniques,” Gérard continues, “We brought in an improved variety of cocoa, which produces pods in two and a half years. Today, the people who received seedlings are ready to produce. The aim is to get the communities to participate in the development of a green economy.”

“Twenty thousand people depend on the Reserve’s natural resources, so the challenges are many,” adds Bola Madzoke, who is in charge of ecological monitoring and is a native of Lac Télé, “But the people understand what is at stake.”

Lac Télé now employs 55 people, the majority of whom are from the Reserve, making it one of the main sources of employment in the region.

In the past, the Reserve has been able to work with communities on key issues, such as best sustainable fishing practices. Through village meetings, environmental education, radio spots, films and awareness posters, the team is looking forward to meeting these challenges for the benefit of the entire Reserve.