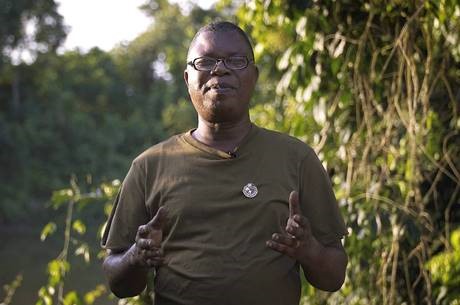 It is with a heavy heart I report the death of our Nouabalé Ndoki Park Warden, Marcel Ngangoue, who passed away on May 16th in Brazzaville, Republic of Congo, after a short illness.

Who was Marcel? After graduating as a technician in forestry, Marcel first worked for the Ministry of Water and Forests in the Likouala region of the Congo as a controller of logging concessions between 1991-1997. During this period, Marcel was more interested in working with logging companies than being a wildlife conservationist. But working closely with the neighboring Nouabale-Ndoki National Park, he became closer and closer to the WCS team with Mike Fay, Richard Ruggiero, Djoni Bourges and many others. Marcel ended up expressing his passion to become a defender of the rights of wildlife, as he liked to say himself.

He got his start with WCS first in 1998 in the station of Makao for the Nouabalé Ndoki National Park, managing the rangers, and then as the head of anti-poaching for the Project for the Management of Ecosystems in the Periphery of the NNNP (PROGEPP). He then left to go to Garoua, a wildlife school in Cameroon for two years. When he returned, he served in different conservation projects in the country and then came back to Nouabalé Ndoki National Park in 2015 where he has shown his determination, commitment and his passion to accomplish his mission as an anti-poaching leader.

After 23 years of his leadership on anti-poaching efforts, Marcel won the 2019 African Ranger Award, which recognizes and supports the achievements and efforts of forest rangers who are addressing the precipitous decline of Africa’s wildlife due to poaching, habitat lost and illegal trade in wildlife.

During his mandate, Marcel handled the arrest of a notorious Congolese poacher who was convicted to 30 years in prison for ivory trafficking and attempted murder of park rangers in 2020.

Marcel always said the protection of wildlife is a commitment we accepted to serve the future generation. He will be missed by his family, our WCS team, and all who had the pleasure to work and engage with him.

(Marcel was included in recent videos produced by WCS. Here were two: 25 Anniversary of Nouabale-Ndoki; and a recent Earth Day Message.)