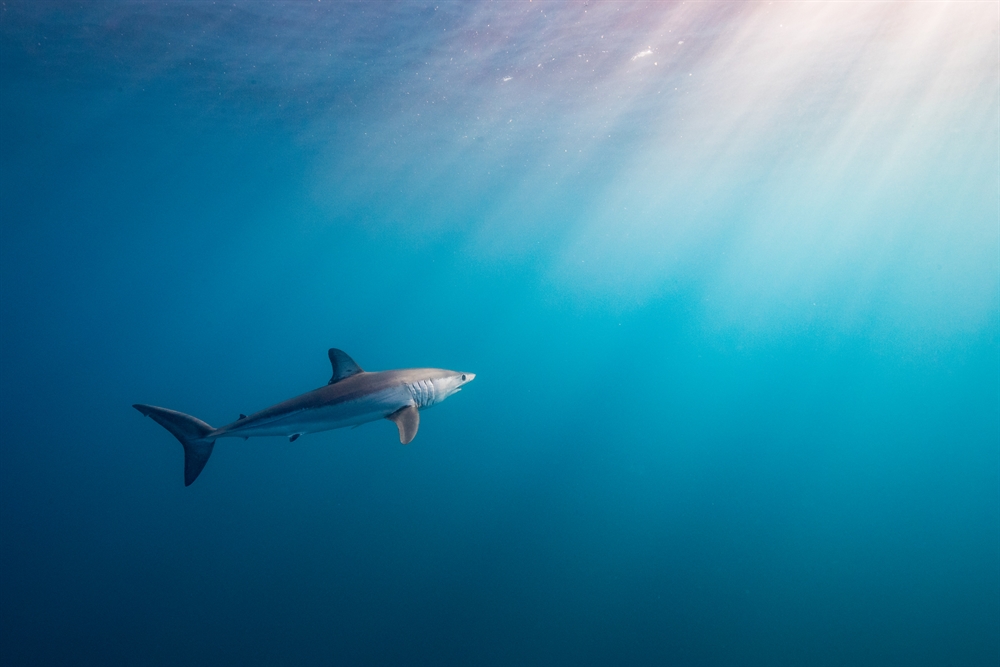 New York – July 6, 2021 – With Shark Week beginning next week (July 11), WCS is offering tips on how members of the media can play an important role in the conservation of these protected animals by helping their audiences understand and appreciate them as an alternative to perpetuating fear and unintended consequences. Additionally, simple language choices that everyone can use will help affect change in attitudes toward sharks and counter the negative image that adversely impacts conservation efforts.

“Sharks have been in our waters for hundreds of millions of years,” said Luke Warwick, Director, WCS Sharks and Rays Program. They are often the top or apex predators within marine ecosystems that play a vital role in maintaining the health of the ocean.

“It is debatable whether or not there are more shark sightings in recent years than in the past, but we do hear reports of sightings more often since camera and video technology is in everyone’s pocket and social media offers an available audience. The fact is that sharks have far more to fear from humans than humans have to fear from sharks, and almost all species are at tiny fractions of their numbers historically.”

1.      Sharks are not mindless eating machines: The vast majority of shark species are completely harmless to humans and shark sightings are common. In fact, many shark species are in sharp decline around the world due to human activities and over-fishing. Their role in the ecosystem is vital to maintaining healthy oceans by maintaining balance in the food chain and controlling populations of prey species.

2.      The most dangerous animal in the ocean – people: Sharks have been slaughtered for centuries and overfished for sport, shark fin soup, meat, and other commercial uses. Sharks are in peril because their slow reproduction is unable to keep up with the 100,000+ a day that are taken from the water.

3.      Shark attacks are extremely rare: It is extremely rare for a shark to attack a human. If a person is bitten by a shark, it is likely that the shark was following prey and mistook the person for something else. Many species have sharp teeth that protrude from the mouth, so an inadvertent brush against the flesh can also be mistaken for an attack. If someone sees a shark, they should simply leave it alone and move away from it.

4.      Sharks are in need of help, not harm: Sensational shark reports have resulted in beach closures and people fishing for, pulling from the surf, and killing sharks. This reaction is out of fear and has resulted in the unnecessary killing of harmless animals. Shark populations are in steep decline and are at a fraction of what their numbers were historically. Forty-six species of sharks and rays have been listed under the Convention on the International Trade in Endangered Species of Wild Fauna and Flora (CITES) to control unsustainable trade in shark products. In the U.S., some overfished species are protected from commercial and recreational fishing in both federal and state waters (including New York and New Jersey).

5.      If you look, you will find: Because nearly everyone carries a phone with photo and video capabilities, it is much easier for shark sightings to be confirmed and communicated. Sharks have always been here and hopefully always will be. How these sightings are communicated will go a long way to how willing people are to participate in their conservation.

1.      Shark (as descriptor of people): Frequently used as a derogatory term for a particularly cunning or problematic lawyer or businessperson, this term is derived from people’s perception that sharks are aggressive and prey on people.

2.      Shark Bait (as descriptor of people): This is a phrase used to describe someone or something that is particularly vulnerable to attack. Also used as a derogatory term to describe a person who is naïve and likely to fall for a scam or scheme.

3.      Shark-infested waters: The term “infested” has negative connotations. These waters are their home. Many species of sharks are migratory and use parts of their ecosystem as breeding grounds and nurseries. In these areas or when food is more abundant, there will naturally be larger numbers of sharks. Shark-infested waters are a good thing. Sharks help keep coral reefs and other marine ecosystems heathy.

4.      Swimming with Sharks: This is an idiom for a person that is less experienced and likely to be taken advantage of by aggressive persons. Sharks are mischaracterized here by would-be “killer instincts” in a business setting.

5.      Man-eater:  Not only do proper gender equality guidelines make this term outdated, but when describing a large shark, this is term perpetuates falsehoods about sharks and only serves to instill fear.

+  ANY reference to “Jaws” (including the soundtrack): Although these are classic films, it is the most obvious example of the impact film, TV, and popular culture have influenced how people see and feel about sharks. It’s fiction. Let’s just move on!

“Shark Week has become a cultural phenomenon that intentionally preys on the fear of what we all know lives largely unseen below the surface of the ocean,” Said Hans Walters, Supervisor, New York Aquarium, and Field Scientist, WCS’s New York Seascape Program. “Movies, books, social media, and sensational journalism only serve to aggravate unwarranted fear of the unknown and unseen. For the Wildlife Conservation Society (WCS), Shark Week is an opportunity bring much needed attention to the threats sharks face and their importance to heathy ocean ecosystems.”

There are more than 500 species of sharks in the ocean (1000 if closely-related skates and rays are included) and the vast majority are completely harmless to humans. In New York waters alone, there are 26 species of sharks that live or migrate at different times of year. When a rare injury does occur, it is usually because a shark mistakes a person for its actual prey. It is a common misconception, largely born out of myth and popular culture, that sharks are aggressive toward humans and seek them out.