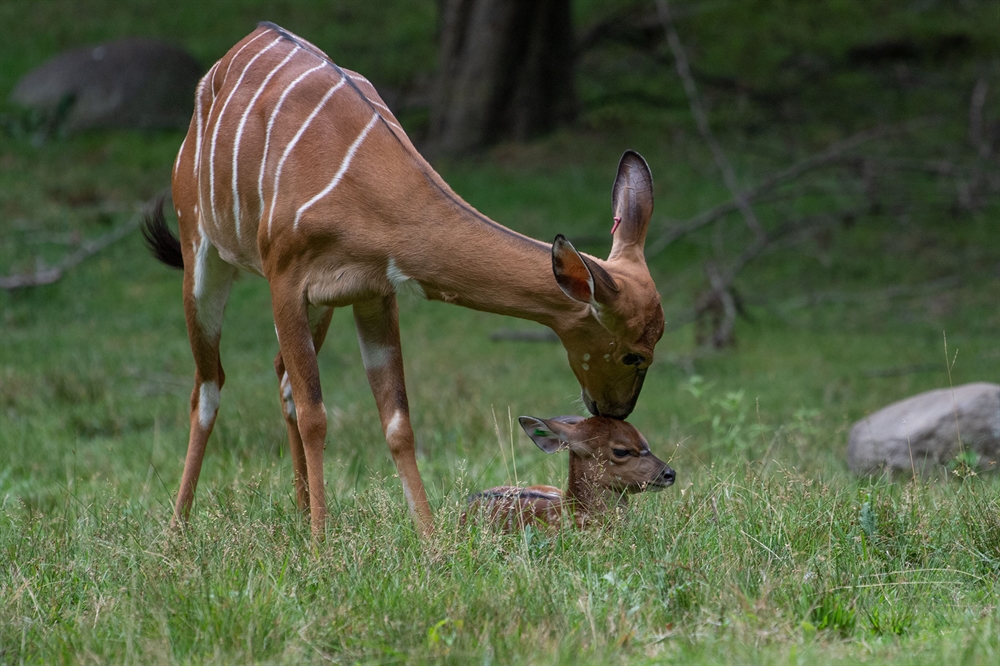 Ten of the images come from WCS’s Bronx Zoo and other wildlife parks, and ten images are from WCS’s Global Conservation Programs taken by WCS staff working around the world.

A nyala (Tragelaphus angasii) and her calf bonding in the tall grass of the African Plains at the Bronx Zoo. Nyala is an antelope species native to Southern Africa.

An Amur tiger (Panthera tigris altaica) sits and relaxes in the water at Tiger Mountain at the Bronx Zoo. Amur tigers, also known as Siberian tigers, are the largest living cat species on Earth.

Sydney, a harbor seal (Phoca vitulina), was rescued from a beach in California as a newborn. After several months being nursed back to health at the Pacific Marine Mammal Center, the young seal was transferred to the New York Aquarium where she joined the other seals.

An Amur leopard (Panthera pardus orientalis) in JungleWorld at the Bronx Zoo. Amur leopards are considered one of the most endangered species of big cat. Estimates indicate there are fewer than 100 individuals remaining in the wild.

North American river otters (Lontra canadensis) stand at attention along the Discovery Trail at the Prospect Park Zoo in Brooklyn. The zoo has a successful breeding program for the species.

This juvenile puma (Puma concolor) was removed from a Bronx home and brought to the Bronx Zoo by authorities. After a short stay at the zoo, the cat was moved to its permanent home at a big cat facility in Arkansas.

The Bronx Zoo works with partners across New York State on a head start program that helps the conservation of Eastern Hellbenders (Cryptobranchus alleganiensis). Eggs are collected, hatched in a special facility at the Bronx Zoo, and are raised for a few years before they are returned to the watershed. The program allows the Hellbenders to grow to a size where they are less likely to be predated.

Just announced in December 2021, the Queens Zoo has two new Andean bear cubs (Tremarctos ornatus). The cubs have started to venture outdoors and explore their exhibit. Andean bears are the only bear species native to South America and are threatened by human activities including deforestation and poaching.

A forest elephant (Loxodonta cyclotis) feeding in a grassy area in Gabon. WCS researchers and their partners developed a non-invasive method of counting this species, which can be surprisingly secretive and difficult to see in dense forests. In October, WCS released a study confirming 95,000 forest elephants live in this Central African nation making it a key conservation stronghold.

#2 – ARCTIC FOX:  An Arctic Fox (Vulpes lagopus) stretches near its den in Prudhoe Bay, Alaska. WCS research in the region has revealed that oil infrastructure on the North Slope of Alaska has allowed red foxes to colonize and prey on this smaller species. WCS warns that absent a suitable plan, the ghosts of the oil industry will haunt Alaska’s wildlife long after the wells are gone.

#3 – GIANT SOUTH AMERICAN RIVER TURTLE: One of the great wildlife spectacles of Latin America is the nesting of more than 80,000 giant South American river turtles (Podocnemis expansa) on the sandbanks of the Guaporé River on the Brazil/Bolivia border. WCS researchers monitors this species, which has been drastically reduced due to overharvest for its meat and oil, and works with local communities to safeguard remaining populations.

#4 – AMUR TIGER: This year, WCS and partners published a study confirming an amazing comeback of Amur tiger (Panthera tigris altaica) in northeastern China. Due to extensive land-use planning, improved habitat connectivity, restoration of prey, and reduction of human impacts, some 55 tigers now live in this region that 20 years earlier supported virtually none.

#5 – CROSS RIVER GORILLA:  WCS’s Nigeria program announced in July that camera trap surveys revealed that the tiny Afi Mountain Wildlife Sanctuary supported a surprising array of wildlife including Cross River gorillas (Gorilla gorilla diehli) the world’s most endangered great ape numbering perhaps 300 individuals. The success of the sanctuary is a testimony to the dedication of local conservationists and surrounding communities committed to protecting its wildlife.

#6 – BISON: A Bison (Bison bison) photographed in Old Harbor, Kodiak Island, Alaska. WCS is working with local partners, including the Alutiic Tribe, to introduce wild bison to this landscape to offer alternative protein sources now that whaling and industrial-scale commercial fishing are fading as a way of life. Bison also offer an alternative to the region’s modern reliance on importing food at historically high expense.

#7 – Schneider’s marmoset: Earlier this year, scientists described a new species of monkey called Schneider’s marmoset (Mico schneideri), living in the highly threatened, but little-studied forests of Mato Grosso State in Brazil. The discovery was made by a team of researchers led by Rodrigo Costa Araújo, currently an associate researcher at Museu Paraense Emílio Goeldi. Araújo was funded in part by the Conservation Leadership Programme (CLP), a capacity-building partnership between WCS, BirdLife International and Fauna & Flora International (FFI).

#8 – BROWN BEARS: In Alaska, a team from WCS’s Arctic Beringia program found a camera trap used to track wolverines torn apart. The suspects were easy to identify. Each station has two cameras. In this case, the remaining one photographed the attackers—brown bear (Ursos arctos) cubs plus a sow and another cub just out of the frame.

#9 – LEATHERBACK SEA TURTLE:  A hatchling leatherback sea turtle (Dermochelys coriacea) makes it to ocean home on the Solomon Islands. In support of leatherback and other marine turtle conservation, WCS provides both technical and financial support to the community ranger programs on Tetepare, Vangunu and Rendova Islands, where community rangers protect nests through regular beach patrols or through the establishment and management of turtle hatcheries.

#10 –VIBRANT REEF:  A stunning coral reef in Fiji’s Vatu-i-Ra Conservation Park, which encompasses Vatu-i-Ra Island and its adjacent reefs, lagoons, terraces, and pinnacles off the northern coast of Viti Levu.

WCS works with local communities, tourism managers, and government agencies to manage this protected area, which is threatened by invasive species, illegal fishing and climate change.