The Tsavo-Mkomazi landscape is an extensive semi-arid landscape. It covers south eastern parts of Kenya and north eastern part of Tanzania with diverse vegetation comprising of shrubs, grasslands, bushlands and forests. The six diverse communities who live in the landscape include the Maasai and Orma who are pastoralists and livestock keepers, the Taveta, Dawida and Wasambaa who are crop farmers, and the Pare and Watta who are hunters and gatherers.

In the 70’s and early 80’s, explains Kenneth, elephant population in the Tsavo was about 50,000. This number declined significantly to about 6,000 in 1989 as a result of poaching. Nonetheless, as a result of community participation in conservation, amongst other measures, the number has had an upward trajectory since then. According to the 2017 census, the elephant population had increased to 12,800. However, challenges such as illegal wildlife trade, human elephant conflict, water scarcity and infrastructure development, continue to face the elephant population. 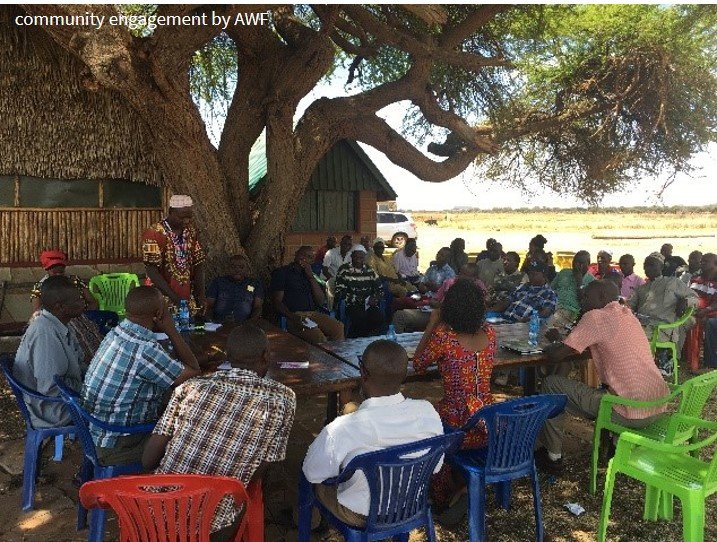 While engaging the local communities in the Tsavo-Mkomazi landscape, AWF has put in place various interventions to reinforce anti-poaching activities. Establishing community scout units within critical areas considered dangerous to elephants poaching and human-wildlife conflict. These scouts are selected from the local communities. The establishment of scouts has especially been beneficial to the landscape’s Toloha region that suffered six years of produce loss due to crop raids by elephants. After introducing scouts in 2017, all households were able to harvest their produce. The ripple effect is that poaching has declined, evidenced by the 200 elephants residing within the community now as compared to 20 elephants in 2017.

Due to the vast landscape, having rangers or scouts in all these range is nearly impossible, says Kenneth. To help communities tackle human wildlife conflict, AWF makes sure that the farmers are the first responders to human wildlife conflict. This is done by identifying hotspot areas and training farmers to use simple methods to scare elephants as well as equipping them to communicate and relay information to the village crop protection teams. Made up of volunteers from the village, the crop protection team then alerts the village game scout, who will link with the game officer/warden.

Another intervention is the establishment of grassroots meetings which involves engaging the communities in discussing issues that may arise and strategize on best ways to solve them. This ensures that the communities are part and parcel of making decisions on wildlife conservation.

To respond to the water scarcity threat, AWF provides water for wildlife both inside and outside protected areas through de-silting of earth water pans and in some special cases sink boreholes. Livestock, wildlife and Humans can then utilize this water harmoniously.

In addition, it advocates for land use planning to ensure wildlife conservation, livestock husbandry and crop production be carried out without conflict.

Conservation enterprises within the landscape There are several success story of working conservation enterprises. In DRC, locals who were primarily agriculturalists were not able to access market for their products hence substituted with bush meat to meet their budgetary deficit. To help the farmers, AWF provided a marine vessel that would help the farmers ferry their products from production point to market place in Kinshasa from MLW interior. Access to market helped reduce demand for game meat and subsequently reduction in wildlife killings.

LUMO Conservancy
In LUMO Conservancy, the objective of the enterprise is to create more space for wildlife. AWF therefore supported the coming together of three ranches (Lualenyi, Mramba and Oza) to form LUMO conservancy in the ancient elephant corridor between Tsavo East and West national parks. The community must own conservation enterprises in order to provide tangible benefits to landowners. However, the communities in most cases may not have the necessary technical and or management skillsets to manage these enterprises.

Three common models of managing these enterprises have been tried with varied success. Enterprise owned and run by community including conservancy. Enterprise owned by community and run by private individual or company on a greed terms with community meeting the day to day management costs of conservancy and enterprise owned by community run by private person or company but community still manage the conservancy. The last model has recorded a significant success across many conservancies. As is the case of LUMO, a co-management model between community and the proprietor is applied. The community retains the responsibility to manage the land, meet the cost of operation and hire managers and ranges while the proprietor runs the facility that is, conservation enterprise that generates incomes to conservancy through; the rents/lease fees, gate entry fee and a percentage of bed night fee. Once operation costs have been met, the balance is shared as benefits on agreed sharing formulae. Through this model, AWF has been working with LUMO conservancy to create more space for wildlife as well as an increase in socio-economic development in order to reduce human-wildlife conflict and promote conservation stewardship. Since its active involvement in mid-2016, there has been an improvement in revenue collection including gate fee, bed nights and the lease fee. Successes include a 300% increase in community bursaries, a 200% growth in community shares, and introduction of community livelihood fund that provides money ready for borrowing by the larger community with aim of spuring up economic development at the local level. Improvement in staff’s salary and community social infrastructure such as water tanks and, students desks to schools amongst others.

For a successful conservancy enterprise, says George, it is important to make a business case from the very beginning, evaluate its viability including all costs of establishment and running against potential income to be generated. The idea must be integrated with the regional economic framework (identify opportunities and synergies with existing and proposed enterprises from other sectors including tourism) and have a credible benefit sharing plan which all players agree on (to reduce over reliance on donor funding). It is important to practice transparency on revenue generation and expenditure (to reduce speculation, suspicion, politicking, restores trust and build cohesion among members), build strong partnerships and communication between conservancies and protected areas and build capacity on the leadership of the conservancy.

Featured Speakers
Kenneth Kimitei is a wildlife manager by profession with over 13 years of conservation work. Most of his work is guided by data and modeling to establish more ideal strategies to solve poaching, human wildlife conflicts and other emerging issues. He is interested in the involvement of the local community and government authorities in the collective responsibility of managing and conserving wildlife in the transboundary landscape where wildlife does not know boundaries.

George Okwaro has over 10 years of conservation experience spanning from forested landscapes to terrestrial ecosystems. Currently, he is engrossed in the economics of conservation field, where he is interested in the use of economic tools to understand the costs and benefits of sustaining natural ecosystems. Aimed at accomplishing more widespread and lasting conservation by lowering its costs, revealing its benefits and fitting it within genuine economic development. George is currently the chief of party of a USAID funded AWF project supporting LUMO conservancy.

This event was hosted by The Africa Biodiversity Collaborative Group as a part of its Nairobi, Kenya speaker series, which aims to foster information exchange and lessons sharing among cross-sector practitioners. To participate as a featured speaker, please contact Evelyn Namvua at enamvua@abcg.org and view the Guidelines to Speakers here.