by abcg
News & Updates
Share this
Dr. Will Fowlds gave a talk highlighting his personal accounts with organized wildlife crime and response to the poaching crisis
South Africa’s rhino crisis forms a major component of the global, illegal, trade in wildlife. The poaching and the organised crime networks directing them, threaten to have a significant negative effect on conservation, crime and controlled governance in the region.
My conservation involvement until three years ago was focused on developing multi-stakeholder protected areas and fulfilling my passion as a wildlife vet through clinical work and education. This all changed when I became intimately affected by the implications of poaching through the rhino I have been called to, and who had survived being mutilated. At the time, very little was understood about the poaching methods or the systems driving these brutal criminal acts. I recorded the first ever live footage of a poaching survivor in Feb 2011 and my personal accounts of these incidences have taken me into spaces within media, politics, environmental governance and corporate social responsibility, where I would not have chosen to go.
About Dr. Fowlds

Dr. Will Fowld is a wildlife veterinarian in South Africa. His conservation experience is rooted in the conversion of a fifth generation family owned domestic farm, along with neighboring properties into what is now known as the Amakhala Game Reserve. One of the privileges in Will’s professional life is to work with Rhino around the Eastern Cape reserves and to get to know them as individuals. 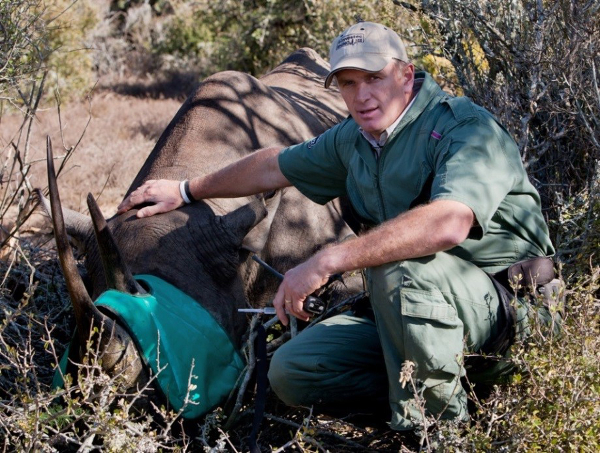 Will travels to the East and to the West sharing his personal testimony of the brutal reality of poaching from the coal face as well as efforts to bring back rhino from the brink of death with his pioneering veterinary care. He has partnered with Investec in the form of Investec Rhino Lifeline to enable him to increase his work in the areas of rescue, education and prevention, and to impact on the environmental crisis in these watershed times. He is supported by the Wilderness Foundation and collaborates on rhino related projects through them.

He spends part of his time facilitating courses which connect students from around the world with the diversity of African wildlife. He studied veterinary science through Onderstepoort in Pretoria.