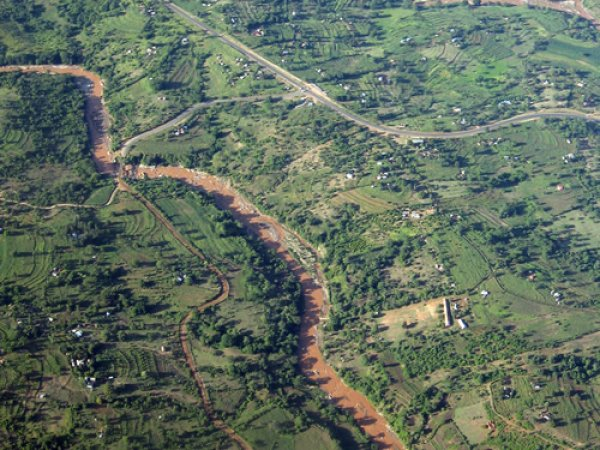 To address the challenge of conserving biodiversity outside of protected areas, conservation organizations are assessing the range of land and natural resource-use management tools, especially on community-land, to achieve biodiversity conservation. Among these tools are zoning, long-term land leases, voluntary easements, measures to secure tenure, and land purchases. The application of these new tools on community land depends in large measure on the law and practice of land tenure and natural resource property rights in the individual countries. ABCG organizations are working to advance the use of new land tools for biodiversity conservation and local development purposes on land outside the protected areas in Kenya and Tanzania. This work is supported by the US Agency for International Developments‘ Biodiversity Analysis and Technical Support (BATS) Program of its Africa Bureau.

The Jane Goodall Institute facilitated communities in developing general management plans for two Local Authority Forestry Reserves (LAFRs) in Tanzania, including training sessions presented in the report ‘How to Establish Participatory Forest Management‘, to mention but one; the LAFRs had been created in FY2013 with funds from USAID’s Tanzania Mission.

The World Resources Institute produced three short animated videos to reach a broader audience, and reflecting much of what Task C members have recently generated, such as ‘A Farmer in Africa: Overlapping Property Rights‘.

Find much more output reported in the Annual Report. Additionally, a number of pending activities will be completed by the end of the agreement. AWF will implement and, it is hoped, operationalize Zimbabwe’s first wholly community-owned wildlife conservancy—the latter contingent on outside monies. JGI will create maps of high-biodiversity areas in the LAFRs for conservation prioritization. WRI will produce a fourth video, and a fifth after the award’s completion.

In the past year, ABCG member organizations including AWF, JGI, TNC and WRI continued to collaborate on reviewing land tenure issues in key countries including Kenya, Tanzania and Zimbabwe; organized village sensitization meetings and implemented land use tenure actions; conducted research on compensation for property losses for private land-use restrictions in several countries; and developed a new benefit-sharing business model in communal conservancy areas. The following is a selection of task accomplishments.

AWF continued to focus on improving understanding of the evolution of tenure relationships in Zimbabwe as part of the indigenization process. Efforts were focus on developing a working model and pilot restructuring for conservancies. Read the summary Report on: A Proposed Business Model for a Conservation Based Property in a Conservancy in Zimbabwe.

TNC collaborated with JGI and Frankfurt Zoological Society to launch the Greater Mahale Ecosystem (GME) Steering Committee, which will among others coordinate the development of an Integrated Management Plan for the GME and advance conservation of priority areas within the GME. The TNC report, Steps towards Implementing the Tongwe West District Authority Reserve for Mpanda District Council provides more details on the launch of this steering committee in June, participants, as well as it’s intended objectives.

WRI conducted research on compensation for property losses from private land-use restrictions. The research focused on the law and practice of land-use restrictions in Kenya, Uganda and Zambia. It compared the findings from Africa with compensation principles in the U.S.(Compensation for Land Use Restrictions – Kenya, Uganda and Zambia, in Comparison to the United States of America) A written report was prepared that captures the data, findings and recommendations [to be published soon]. WRI also finalized a research report that captures the main findings and recommendations from our research on overlapping land and natural resource rights (Overlapping Land and Natural Resource Property Rights: A Comparative Analysis from Africa). The report was submitted to the April 2013 World Bank Land and Poverty Conference and is also available on the web (http://www.conftool.com/landandpoverty2013/index.php?page=browseSessions&presentations=show&form_session=62&metadata=show&print=head).

Peter Veit of WRI delivered a PowerPoint presentation at the annual 2013 World Bank Land and Poverty Conference in Washington, DC in April 2013. The presentation focused on the findings and recommendations of WRI’s research on overlapping land and natural resource rights (Overlapping Land and Natural Resource Property Rights: A Comparative Analysis from Africa). Gaia Larsen of WRI made a similar presentation titled Overlapping Land and Natural Resource Rights in Africa at the International Congress for Conservation Biology (ICCB) conference in Baltimore, MD in July 2013 (Overlapping Land and Resource Rights in Africa). In addition, WRI developed a short, animated video on private land-use restrictions—A Farmer in Africa: Property Rights. The video was ranked No.1 by GRIST—“26 Food Films you have to Watch” (http://grist.org/food/26-films-every-food-activist-must-watch/).

Land Use FY2012 Accomplishments and Outcomes

In the past year, ABCG member organizations including AWF, JGI, TNC and WRI have collaborated to review land tenure issues in key countries including Kenya, Tanzania and Zimbabwe; analyzed communal conservancies and related strategies in several countries; and examined the law and practice of private land-use restrictions and assessed their usefulness in achieving biodiversity conservation outside the protected estate. Much progress has been achieved in illuminating land use constraints, and uncovering opportunities for intervention as a first step in tackling poverty, biodiversity loss and conflict resolution. This paves the way to helping communities and governments at all levels implement a knowledge-based strategy integrating biodiversity conservation into local, regional and national development plans. Key results from the below activites were shared in an ABCG Thematic Meeting on October 2, 2012.

ABCG members the Jane Goodall Institute and The Nature Conservancy are working together with the Frankfurt Zoological Society (FZS) to assist local governments and citizen in general land management planning in the Greater Mahale Ecosystem of Western Tanzania.

AWF has also developed a business model to pilot application of the indigenization of the wildlife sector focused on the Save Conservancy in Zimbabwes Southeast Lowveld which has been the center of controversy between government, local communities and private land owners. This will include valuation, zoning and community engagement. The model will be presented to the relevant ministry for review and endorsement. Information and data was collected through site visits, discussions with key partner (i.e. Conservancy members and staff, ZPWMA staff), economic valuations, and community engagement using AWF staff directly and commissioned consultancy. Several high level meetings were held between AWF Senior Program staff led by the AWF President and ZPWMA management, board of trustees, the Minister, USAID Mission & other donors, and partners in Zimbabwe to discuss the findings. By the end of the year, a Report of Study and Recommended Model for Piloting was completed and is being finalized for presentation to the Minister of Environment and Natural Resources Management to endorse recommended course of action.

Research on Overlapping Land and Natural Resource Property Rights (WRI)
In many African countries, most land and natural resources are either the property of the state or are public resources vested in or held in trust by the government for the people. While the state may be the owner, rights of access, control, transfer and exclusionthe bundle of property rightsare held under customary tenure arrangements or grants by the state under formal law for land and various natural resources on or below the land (e.g., minerals, oil, natural gas, water, trees, and wildlife). Under formal law, these property rights regimes are separate and distinct. The rights to land often include only surface rights and not rights to these natural resources. As a result, different individuals or institutions may hold surface and natural resource rights on the same plot of land.

WRIs research focuses on the laws that govern land and natural resource property rights and the implications for the holder of the land (surface) rights. The review of laws included petroleum, minerals and trees/forests in six African countries: Kenya, Tanzania, Uganda, Nigeria, Ghana and Liberia. WRI is developing a series of recommendations designed to reduce conflict and promote development, including harmonizing legislation and promoting more coordination across the government agencies responsible for implementing the laws. The full report will be completed in FY2013.