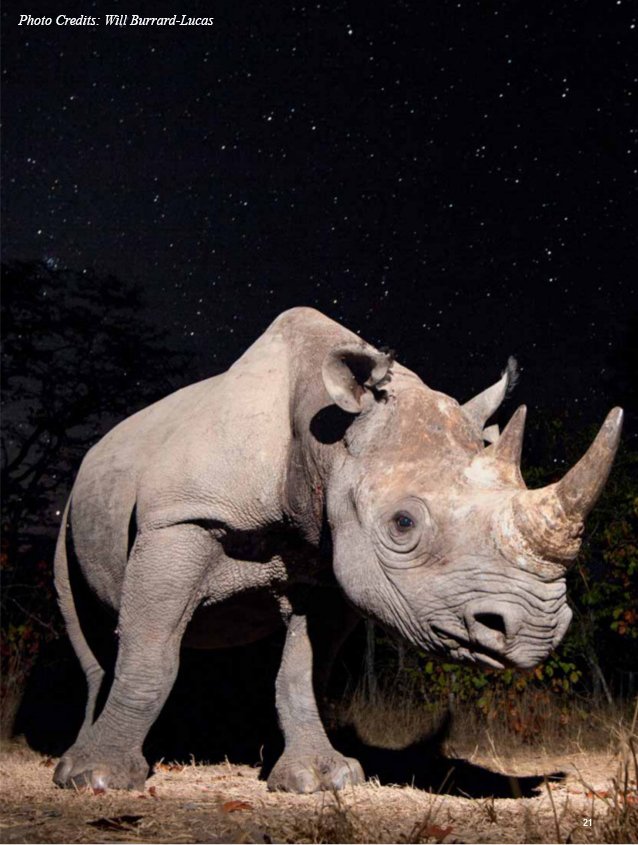 Tanzania’s black rhino population has been facing an upward trajectory since its major decline in the period between late 70’s and early 90’s, which was majorly credited to poaching, hunting of bush meat and habitat loss. Conservation efforts by the government, non-governmental and other actors play a major role in ensuring sustainable rhino management.

While speaking on, Black Rhinos of the Serengeti: A Success Story for Tanzania, during an Africa Biodiversity Collaborative Group Washington DC speaker series in April 11, 2019, Rian Labuschagne, Frankfurt Zoological Society (FZS)-Serengeti Conservation Program, explained that in 1972, the black rhino population in the Serengeti National Park in Tanzania was estimated to be about 700. However, from an aerial count in the same year, only 420 rhinos were found. At that time, the border with Kenya was closed making it hard to determine the transboundary movement.

Between late 70’s and early 90’s, rhino numbers had gone down to a mere three rhinos in Moru area in Serengeti and 12 in Ngorongoro Conservation Area, Tanzania. Around that time, there was very little information on rhino population from the northern areas since the border closed and the area overrun by bandits. An adult male walked up from Ngorongoro about 120 km from the crater to meet up with the remaining females in Moru.

An intense foot patrol was carried out in Moru area, in October and November 1995, in a bid to find out whether there were more rhinos, unfortunately this patrol did not yield a different result as only three rhinos were found. A female calf was born in Moru to the youngest female, Mama Serengeti, end of that year. FZS and Tanzania National Parks (TANAPA) joined efforts to protect the Moru rhinos. In the same year, Amina, a young adult female in Ngorongoro was killed and its horns removed. Its 9-month old calf Richard was captured and raised near Arusha national park for two years. This was a big blow to the breeding population as there were only 4 productive females in Ngorongoro at that time.

Richard was translocated to South Africa two years later in exchange for two females, a mother with a sub-calf. The rhinos were brought from Addo National Park, which was in a project of reintroducing to East Africa the rhino population that was previously translocated to South Africa. Unfortunately, one of the females died while the other survived and has seven calves as at now. In the same year, the northern part of Serengeti was opened to tourism and reports from Maasai Mara Game Reserve indicated transboundary movement and the presence of 30-40 animals. In Moru, FZS and TANAPA set up an observation post for daily rhino monitoring, improved their equipment, put in place anti-poaching systems, and put measures to reduce human activity in the area such limiting tourism.

Another reintroduction of five rhinos, two males and three female, from South Africa took place in 2010. Unfortunately, one male was poached and one died. The three females survived.

SENAPA, TAWA, FZS and Friedkin Fund conducted two major rhino operations in the last two years to capture and earmark rhinos in the Serengeti National Park for easy identification by monitoring teams. A total of 43 animals were given a unique ear-notch combination. Rhino capture unit was put in place which was equipped with a 4-wheel drive truck with crane, sledge, transport crate and other equipment needed to capture, tag and move rhinos safely.

A dedicated Mobile Tracking Unit was put in place where the use of Long Range Wide Area Network (LoRaWAN) technology was introduced for remote monitoring of rhinos. LoRaWAN system works like a cellphone network, put in the park with different towers. Non-GPS LoRaWAN equipped sensors are implanted directly into the rhino horns and sends signals to the control room. Rangers were trained by experts from South Africa in rhino and tactical man-tracking.

Rian stated that one of the issues in the 70’s that contributed to loss of rhino populations was the low work morale of the rangers due to poor working conditions. To address this issue, FZS provided food rations in the field to the three rhino protection teams, ensured that salaries and field allowances were paid on time as well as provided equipment needed, added Rian.

Heavy weight vehicles that were previously used were replaced by a less expensive light-weight 4-wheel drive vehicles that allowed for easier and faster navigation enhancing field monitoring especially in Moru where muddy conditions in wet season hampers mobility. In addition, the vehicles are less damaging to the environment. The VHF radio communication system was upgraded to digital radios that ensure full coverage of the park with a full time radio technician to ensure minimum down-time.

Poaching of rhinos for their horns by individuals from neighbouring countries, Dar es Salaam and Rwanda, who are specifically looking for black rhinos is the greatest challenge encountered. TANAPA has put in place an effective intelligence unit that works outside the park and feeds warning information to the operation unit. This has greatly contributed to the unit’s ability to minimize poaching.

The hunt for bush meat through the use of cable snares has also been posing great challenges to the rhino population, says Rian. To address this, FZS and TANAPA has introduced a new initiative where field teams are working to remove snares. The team consist of experts employed from the community program who work with TANAPA rangers in removing snares. The rangers are also empowered to arrest individuals involved in hunting for bush meat. The achievement is that close to 20, 000 snares have been removed in the last year.

Since 1995 to present, Serengeti has experience a 13% growth rate in the number of rhinos, while the average growth rate in Ngorongoro is 6%. The total rhino population is about 160 hence it has crossed the 100 mark for total population.

For more on the presentation, watch below>

Rian Labuschagne manages the Frankfurt Zoological Society’s Serengeti Conservation Program in Tanzania. Headquartered in Serengeti National Park, the project provides technical assistance to the park’s management team, mainly in anti-poaching (aerial and terrestrial), and black rhino monitoring and protection. Prior to this, Rian worked for African Parks Network as the Park Manager of Zakouma National Park in Chad, where he was fully responsible for the management of the park for six years. The focus in Zakouma was putting anti-poaching systems in place in order to bring a halt to the rampant poaching of the park’s remaining elephants. Before moving to Chad, Rian worked for Paul Tudor Jones on the western boundary of the Serengeti Ecosystem as Managing Director of Grumeti Reserves Ltd., where work focused on wildlife protection and management. Rian has also worked in the Ngorongoro Crater Conservation Area in Tanzania, Liwonde National Park in Malawi, and Kruger and Kalahari National Parks in South Africa. Rian has received two awards for his conservation efforts in Africa over the past 40 years: a civilian medal was presented by President Déby of Chad in 2014 for his conservation achievements in Zakouma National Park, and he received the Tusk Prince William Award for Conservation in Africa in 2017.