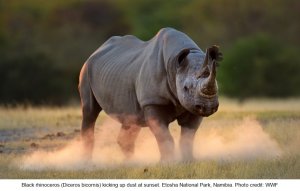 Rhinos have over the years faced risk of extinction due to their horns that are used in various Asian countries for medicinal value, as well as habitat loss over the years. However, with conservation efforts both from government, non-governmental actors, private sectors and other actors, the number of both the white and the black rhino has increased considerably over the years.

This webinar recording of the event explains in depth the situation of the rhinos as well as challenges faced in conservation:

Featured speaker
Dr. Michael Harrison Knight, Chair, IUCN African Rhino Specialist Group / Kavango–Zambezi Trans frontier Conservation Area Transboundary Leader, WWF, holds an interest in the conservation of important charismatic species, such rhinos, given the present threat facing these species, and their flagship/ecological diversity status under which numerous other ecological and conservation related functions/issues hinge. In this regard, he chairs the IUCN African Rhino Specialist Group. He has a passion for Africa’s wild areas and its unique wildlife, as well as its close association with the people of the continent. Dr. Knight joined WWF in August 2018 as the Kavango–Zambezi Trans frontier Conservation Area Transboundary Leader. Prior to joining WWF, he served as the Senior General Manager of the Park Planning & Development section in the Conservation Services Division of SANParks, South Africa.