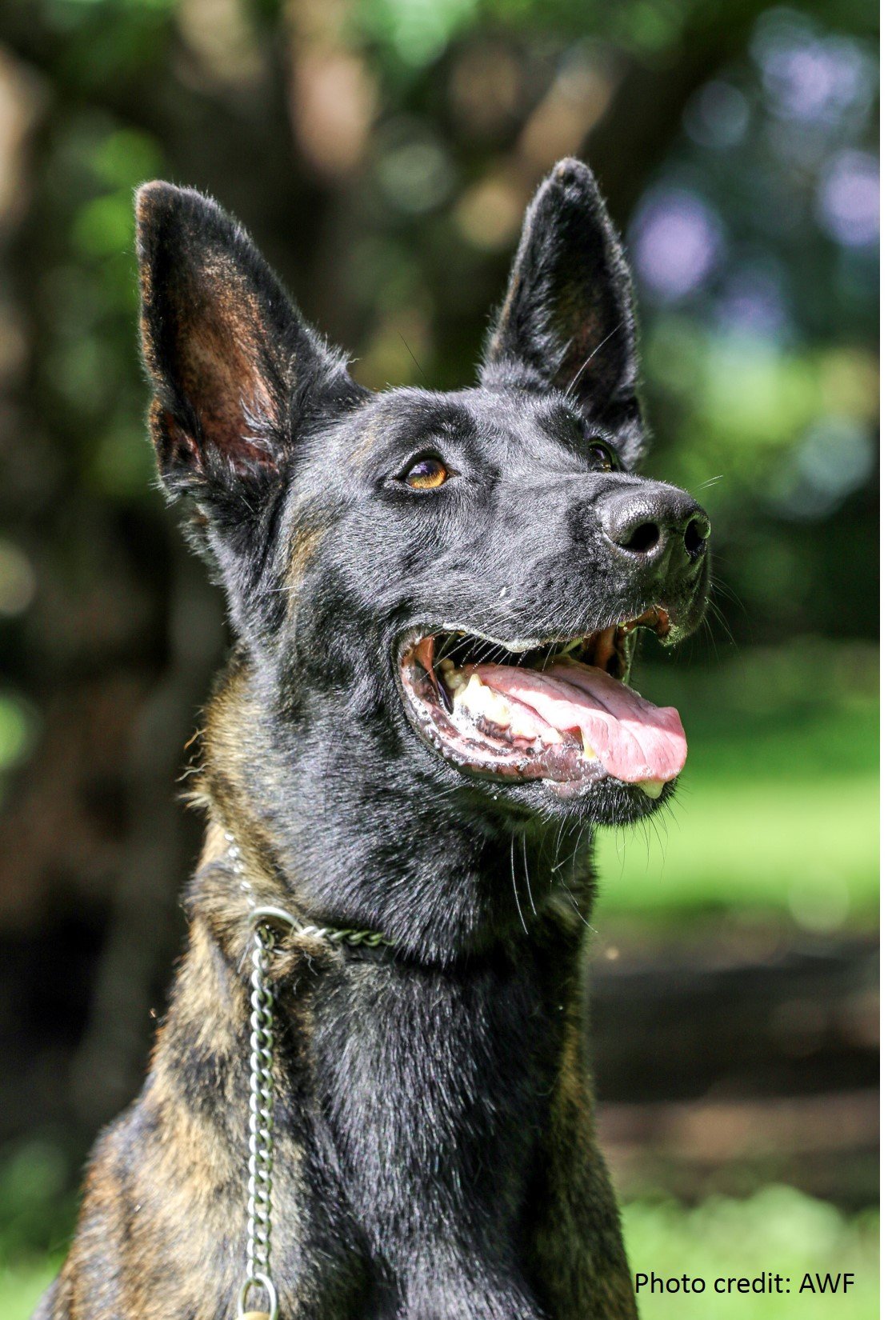 ‘Illegal wildlife trade in the world is worth about USD 19 billion per year and we are losing about 3 rhinos per day (AFRSCG). The amount of elephants being killed each year is between 20,000-30,000.’ Will Powell, African wildlife Foundation (AWF)

Canines have proven successful in searches, arrests and prosecutions of smugglers in several of Africa’s trafficking hot-spots. While discussing the current wildlife trafficking crisis across Africa and the critical role that canines play at a presentation held on June 19, 2018, Will Powell, Director and Head Trainer of Canines for Conservation at AWF shared the canine-handler strategies that have led to a highly successful canine program.

Among the characteristics that make dogs effective in wildlife trafficking detection are: dogs have highly developed olfaction, they are incorruptible, do not lie, are accurate and efficient, and are deterrent. The part of a dog’s brain that is devoted to analyzing smells is proportionally 40 times greater than that in humans.

AWF is working on three tier approach on combatting wildlife trafficking; stop the killing, stop the trafficking, and stop the demand.

Click below to watch the webinar recording from the event.

Will Powell is a British citizen who has been training detection dogs for eleven years. He read Anthropology at University College London, concentrating on relationships between man and animals and elements of animal behavior. He started working for Global Training Academy, the U.S. Texas based dog training company, training mine detection dogs and their handlers in Rwanda in 1996. He went on to train mine and explosive detection dog teams and supervise demining operations in Bosnia, Croatia, Guantanamo Bay in Cuba and Honduras. He then in late 1999 established Working Dogs International Zimbabwe (pvt) Ltd with an American partner and until 2004 their company was supplying landmine detection dogs and consultation services to some of the world’s leading humanitarian demining organizations. Working Dogs International was considered to lead the field in the training of landmine detection dogs worldwide.

Will Powell decided to leave Zimbabwe because of the security and economic climate there and in 2004 established Canine Specialist Services International (CSSI) in Tanzania. CSSI has continued to train world class Explosive and Mine Detection Dogs as well as other working dog disciplines. Including tracking dogs, specific odor detection dogs, Scat detection dogs and assault dogs for antipoaching work. Over the last 6 years Will has also been working as a security consultant for a Danish specialist security company. Through this work he has developed excellent connections throughout Africa which together with his very realistic practical approach to threat will only add to his ability to successfully carry out this work for AWF. Will and his company have an underlying philosophy of doing a job properly and of caring about dogs, people and their jobs.

This event was hosted by the Africa Biodiversity Collaborative Group as a part of its Washington DC speaker series, which aims to foster information exchange and lessons sharing among cross-sector practitioners. To participate as a featured speaker, please contact Evelyn Namvua at enamvua@abcg.org and view the Guidelines to Speakers here.