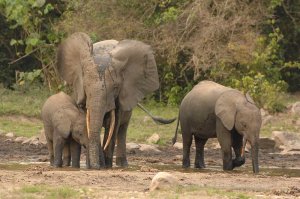 Currently, poaching is devastating elephant populations across Africa, especially in DR Congo. Their numbers have been in constant decline due to several factors, key among them the lack of effective law enforcement across the country in the wildlife sector and overall weakness of ICCN, the government institution responsible for protection and nature conservation in the country. In the Okapi Faunal Reserve, for example, the elephant population declined by approximately 75% from 1996 to 2011.

Several approaches have been implemented in the country to assist ICCN to protect the elephant populations; however, they have proved to be limited in effectiveness and unable to significantly curb the poaching problem. Today, should we give up in front of the magnitude of the disaster that affects elephants or should we imagine new forms of partnership with African governments to save elephants and especially the remaining last populations of forest elephants in DRC?  The Wildlife Conservation Society shares their approaches currently being taken to conserve elephants in DRC.

Overview of the WCS Democratic Republic of the Congo Program, 2015

Watch the webinar recording below: